St. Andrew Rowing Club has accomplished club history this season!  SA participated in the 2022 USRowing Youth National Championships June 9-12th in Sarasota, FL. This regatta brings in the best of the best from all over the country, SA was a top qualifier from the Southeast Region.  All teams must qualify by participating in the area youth regional championships.  Over 3,500 rowers participate from 210 clubs nationwide in as many as 43 events over the 4 day schedule.  This year SA entered several boats for the Women's team.  Both the 1V8+ and the 2V8+, a V2- and both the 4V+ and the U174+ qualified to participate.

The athletes came prepared to do time trials on Thursday. This determines placement on Friday through Sunday.  All of SA’s boats qualified for the A/B Finals on Sunday, racing the fastest  youth clubs in the nation.  Our first and second Varsity 8+ both had the best performance in team history!

1V8+ finished this historical season 9th in the Nation

2V8+ ended the season with an 11th place national standing

4V+ finished this season with a 3rd place national standing

U174+ finished with an amazing 3rd place national standing

And our 2V- pair finished 12th in national standings as well!

According to Rower's Choice, St. Andrew Rowing Club Women's team finished out the 2022 Season with a 9th place National Ranking!

SA is so very excited for our athletes and all they have accomplished this season!

We are an elite Junior Rowing Club focused on providing our athletes with individualized coaching and training to ensure peak performance for competition.  We are the only Junior Program in the metro area with both a dedicated indoor training facility and acres of outdoor training area to ensure the best and most consistent training experience throughout the year. Welcome Guests! Come experience what rowing is all about!

We recognized that every organization has a unique personality and culture, and would like to invite you to experience SA for yourself. We believe our rowers and coaches are at the center of our family and look forward to sharing a few days with you. 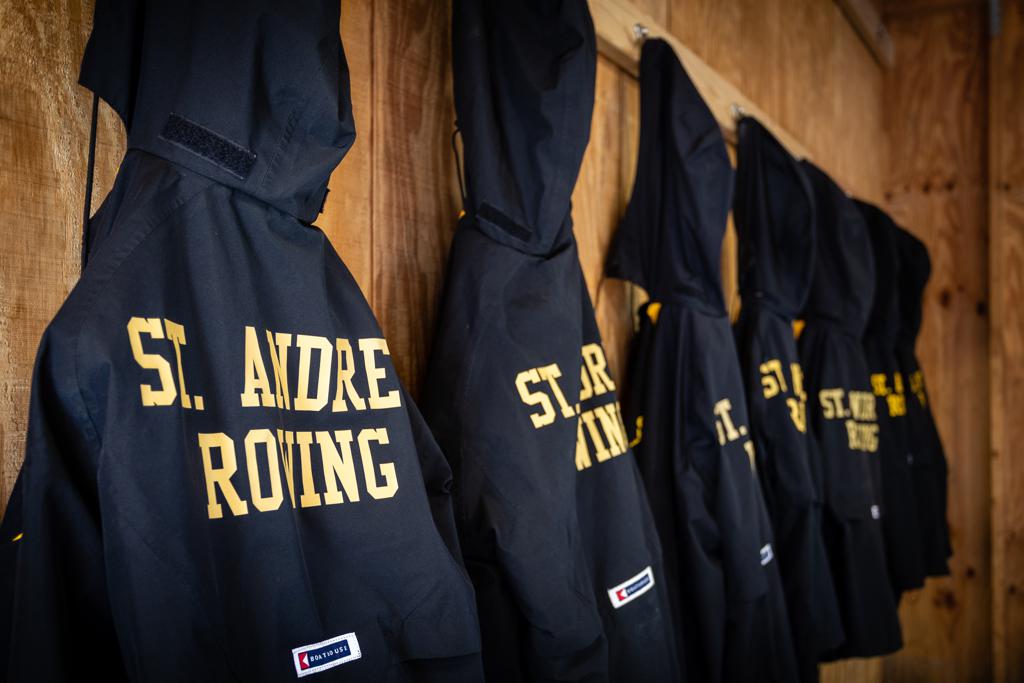 What makes our SA Rowing club so special? The Southeast Youth Regionals serves as the qualification regatta for Youth Nationals in June and this year St. Andrew Rowing Club showed up ready to win not only in the boats but also in points earned!  The women's team came in first overall, first for efficiency and second in overall team points!

The 2022 Southeast Regional Championships will forever be etched in the story of SA: 2022 Women's Southeast Regional Champions! For the girl's squad, building on our successful 2021 season seemed rather unlikely. However, through hard winter and early spring preparation, the girl's squad would go on to do unthinkable things. At the Southeast Regional Championships, our girls qualified a program-best 39 seats for Nationals; and to do this with only 35 total athletes makes the feat twice as remarkable. For the last decade, the team trophy has belonged to one team. On sheer size of their program, combined with the quality of program they offer, our girls proved that even the unlikeliest of outcomes is still achievable. This win marks the very first in program history.

Not only did we qualify so many seats for Nationals, the way in which we did it was the most impressive part. The girls finished with a program-best, SIX gold medals. These golds include the 2-, Varsity 4+, 2nd Varsity 4+, U17 4+, 2nd Varsity 8+, and Varsity 8+. The girls also finished with the bronze in the 3rd Varsity 8+. Three other crews earned a shot in the finals including our second entry in the 2-, second entry in the U17 4+, and our U17 8+ just missing the podium.

Our Varsity 8+, with six girls having raced shortly before, jumped out to a slow start falling all the way back to 5th place. Confidently and maturely, they turned on the power, relied on their training, and trusted each other enough to row through the entire field to capture another open water victory. This historic win allowed SA to retain the Absher Cup for a second straight year.

Our 2nd Varsity 8+ led from the first stroke to the last. They looked head and shoulders above the rest, clipping the field by a 10 second margin of victory. More importantly, this will be the first year in which the 2nd Varsity 8+ is a National Championship event. These girls will look to once again square off against the biggest and best programs in the country at Nationals.

Much like our 2nd Varsity 8+, our Varsity 4+ led from start to finish earning themselves the Augusta Cup. This is the first crew to ever win both the August Cup and Absher Cup at the Southeast Regional Championships. These incredible girls will go into Nationals with a 44-1 record on the season.

Our U17 4+ continued their 38-0 undefeated season with another commanding win. During the season, their closest margin of victory is 8 seconds! This crew will take on the best of the best as on their quest for a National Championship medal in June.

SA had the honor of being invited to participate in the Saratoga Springs invitationals for junior rowers.  This is America's largest sprint race with 10 lanes of 1500 meter racing.  Top crews from the Northeast, Mid-Atlantic and the Midwest participate yearly.  With over 1200 entries and up against some very large, established Northeastern teams, the 20 young female rowers SA flew up to New York were up against some heavy competition and very fast rowing.  SA did not disappoint!  All our rowers came back with a medal! 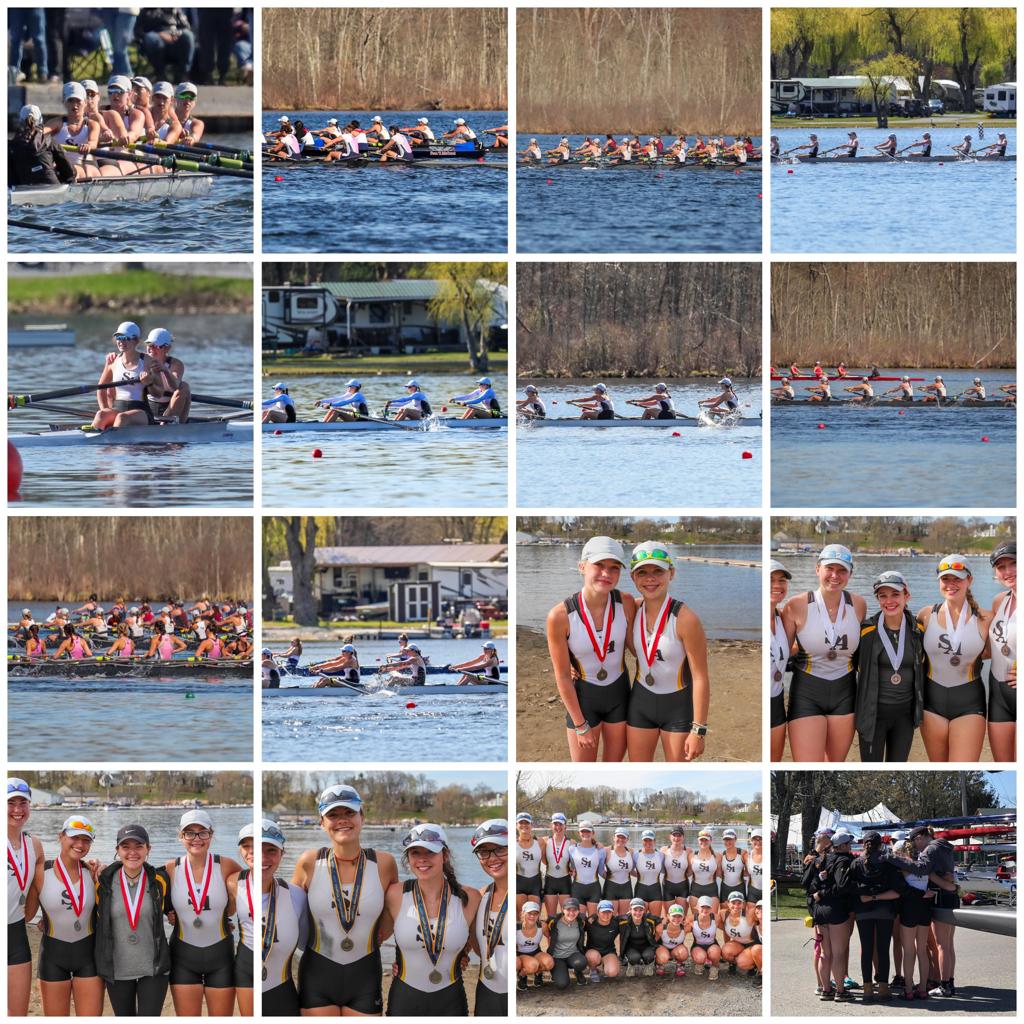 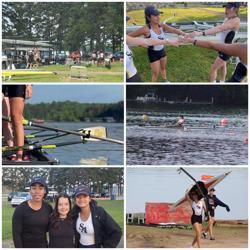 Meanwhile, on the same weekend as the Saratoga Springs Invitationals, the rest of the SA team had a scrimmage with Peachtree City, Lake Lanier Rowing Club and Westminster Rowing Club.   The Men's team took wins in the pair and single races and came in second in the double and Novice 4+.   Our Women placed first in the U17 4-(a), Novice 8+ and a single. They placed 2nd in a single and 3rd place in the U19/U17 4+, U172+ and the U174-(b).  A successful day for our rowers gaining more valuable racing experience before heading into the Southeast Regionals.

Dogwood is known as the premier test of ability amongst our young rowers across the Southeast taking place in Oakridge, TN.  This year SA came away with more than a handful of medals and additional successful experience for our younger rowers on the team.  For our men's team the competition was high, and many of our young men had not raced in a two day regatta before.  While the pure results for the men were probably highlighted by a strong finals appearance from a very young men's 2- (falling just short of the podium), we can say that all of the men's boats rowed well and raced up to their current capabilities.  The rowing is starting to come together, and now the guys have a much fuller picture of the speed out there in the Southeast.

Our women's team had a very successful weekend earning Gold medals in the V8+, 2V8+, Open 8+, V4+, U174+, 2V4+, V4-, and the 2-.  They received Silver medals in the 3V8+ and U168+ races.   Our SA girls swept the 4s for the second year in a row as well as earning the Governor's Cup for a second straight year.  An incredibly successful weekend of racing also awarded them the "Top performers of the week" by Rower's Choice.   Check out our Captains' interview on Instagram for Rower's Choice. 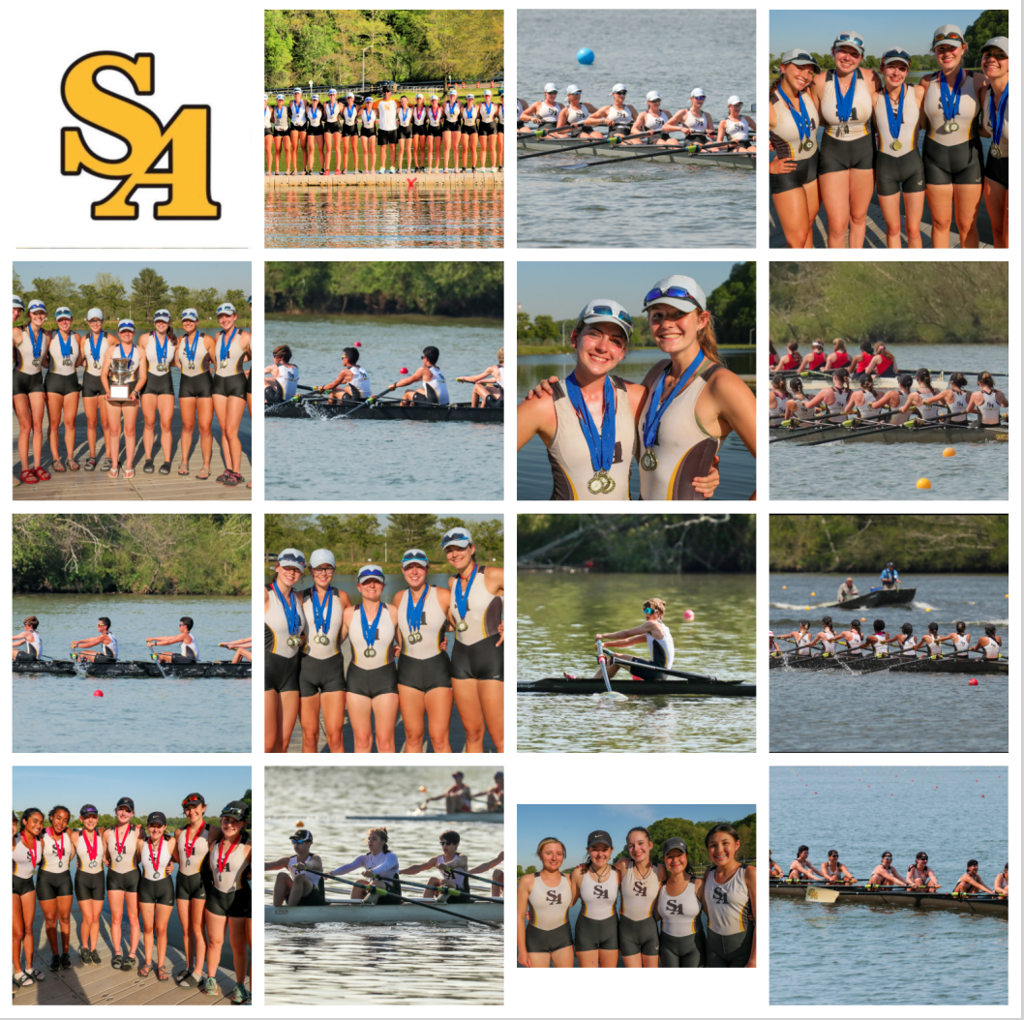 SA Men and Women's Team participated in a successful race day at the Clemson University Boat house on Lake Hartwell.  SA came in first in the majority of the races participating in WU17 4, MV4/WV8, W2V/3V, WU16/U17 8, WV4, W3V4, W2V4, MU15 8/U17 4 with crossing tailwinds and increasing motorboat wake throughout the day. 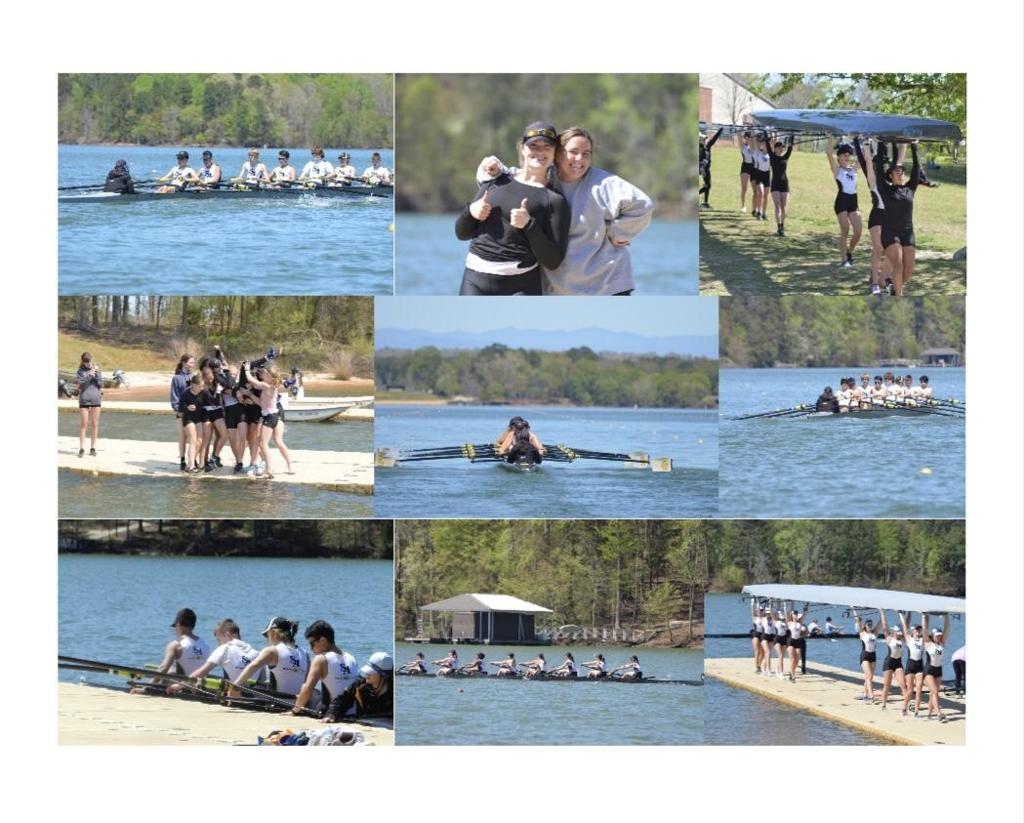 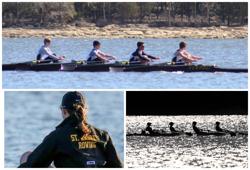 Percy Priest Sprints proved to be a successful day for our SA athletes in Nashville.  The Varsity Women's team came in prepared and determined beating a favored team in unfavorable water conditions.  The Men's team, almost entirely on the younger side this year and a shorthanded crew this weekend, pulled a respectable 4th out of 8 entries in the Men's U19 4x and 5th out of 9 entries in the Men's U17 4x.  Our younger women rowers are showing much promise as well with two of their 4's winning  events and the U17 8+ bringing home the bronze!  And, both the men's and women's team combined were able to bring home the gold and silver medals in the mixed 8+ races!  The small boat races for both the Men and Women's teams were unfortunately cancelled due to wind/water conditions.

What an amazing result for SA!

The Head of The Charles Regatta was founded in 1965 and is the world’s largest rowing race, regularly fielding more than 11,000 athletes from around the world to compete in a full line-up of sculling and sweep rowing events.  This year, St. Andrew Rowing club entered both a women’s youth 4+ and an 8+ with ages ranging from 14-18.

In a head race, teams race on the same course at different starting times and the team with the best time wins. The Head of the Charles is a three-mile course. Races begin at Boston University’s DeWolfe Boathouse and the finish line is three miles upstream at the Eliot Bridge in Brighton. 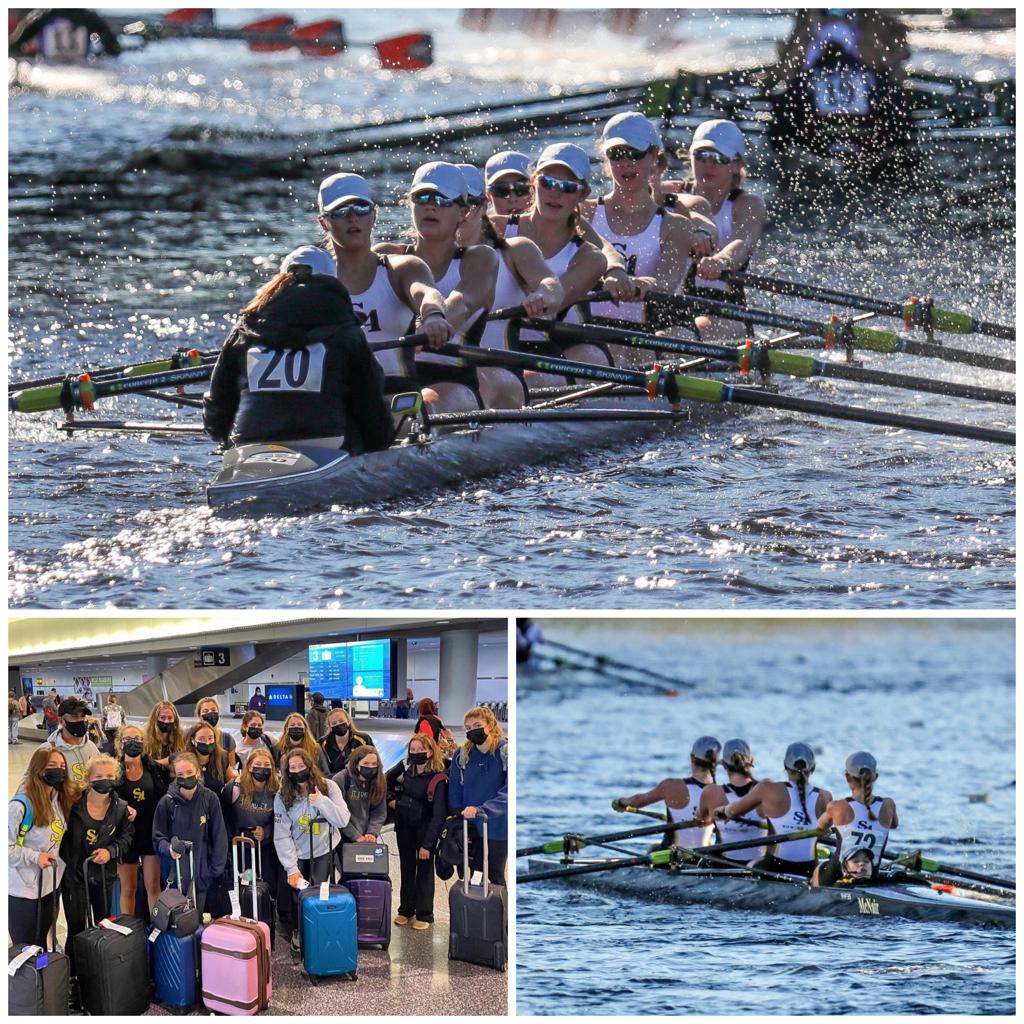 2021 USRowing Southeast Youth Championships:
SE Regionals were held at Melton Lake in Oak Ridge, Tennessee. Our rowers demonstrated the growing strength and depth of the team, with medals in men's and women's events, in small and large boats, and at different levels. We are very excited that multiple SA boats qualified for Nationals! #SAFamily 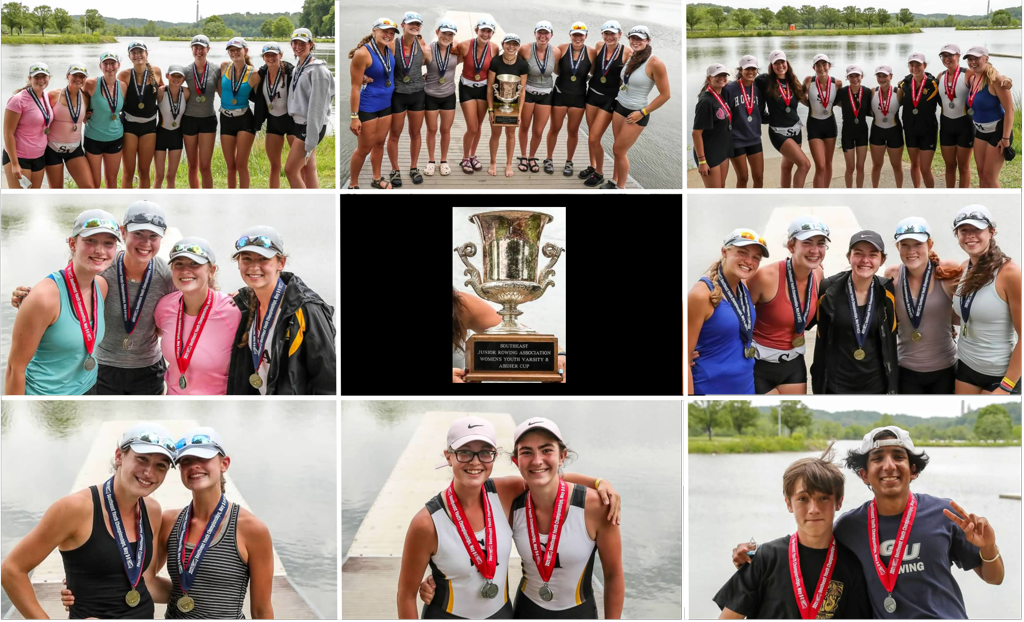 HEAD OF THE HOG REGATTA:  This past November, our team traveled to Sarasota Florida and the Fall Season hard work paid off!  After implementing so many modifications to our regular training program, the team was determined to train hard and train safe.   And boy did they deliver results.  We cannot thank our parents enough for support the club and these kids, for rolling with the changes and for the long hours and long drives to keep these kids training this season! #SAFamily 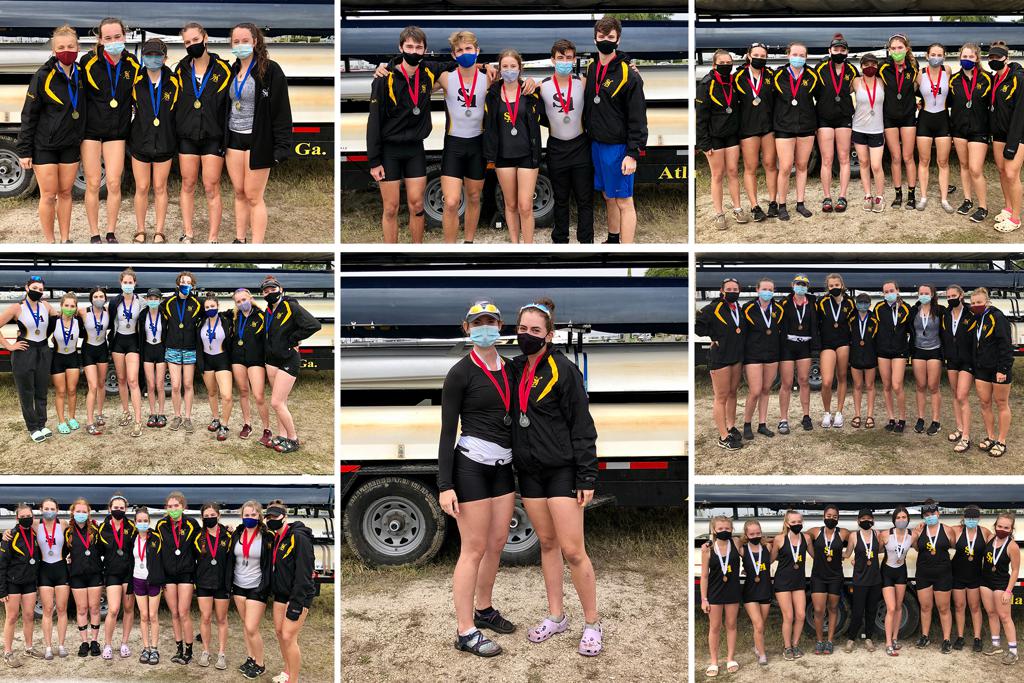 ALL AMERICAN YOUTH INVITATIONAL:  In early November, our team engaged in a 4 team collaboration that resulted in a unique opportunity to participate in a scrimmage down in DeLand, Florida.  Our awesome parents really stepped up and the kids had such a great experience racing for the first time in almost a year.  After implementing so many modifications to our regular training program, the team was determined to get back on the water. And it was such a great experiencing for the team. Thank you to all that made the long trip in support of their athlete's participate. #SAFamily 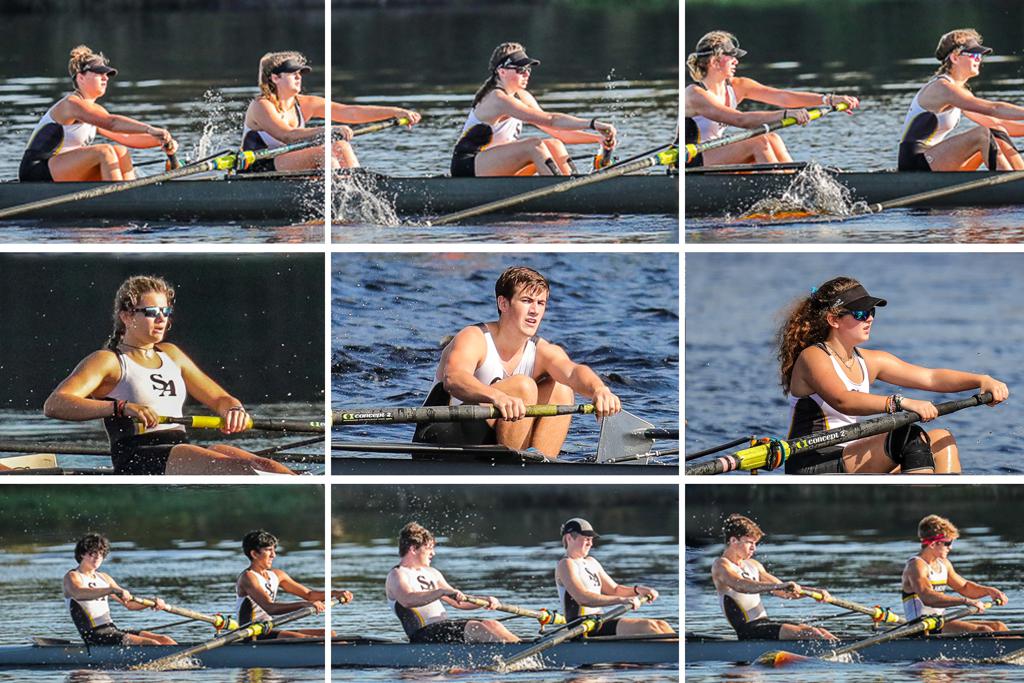 ATLANTA ERG SPRINTS:  SA rowers competed in the Atlanta Erg Sprints, their first official "race" of the season.  It was a great experience at the new location, with the team performing very well across the board.  Several SA Team Records and Atlanta Erg Sprint Records were shattered!!!   Next Up: Tri-Meets March 14th.

HEAD OF THE HOOCH REGATTA:  SA rowers completed in their final race of the Fall Season in Chattanooga, TN at the Head of the Hooch Regatta. 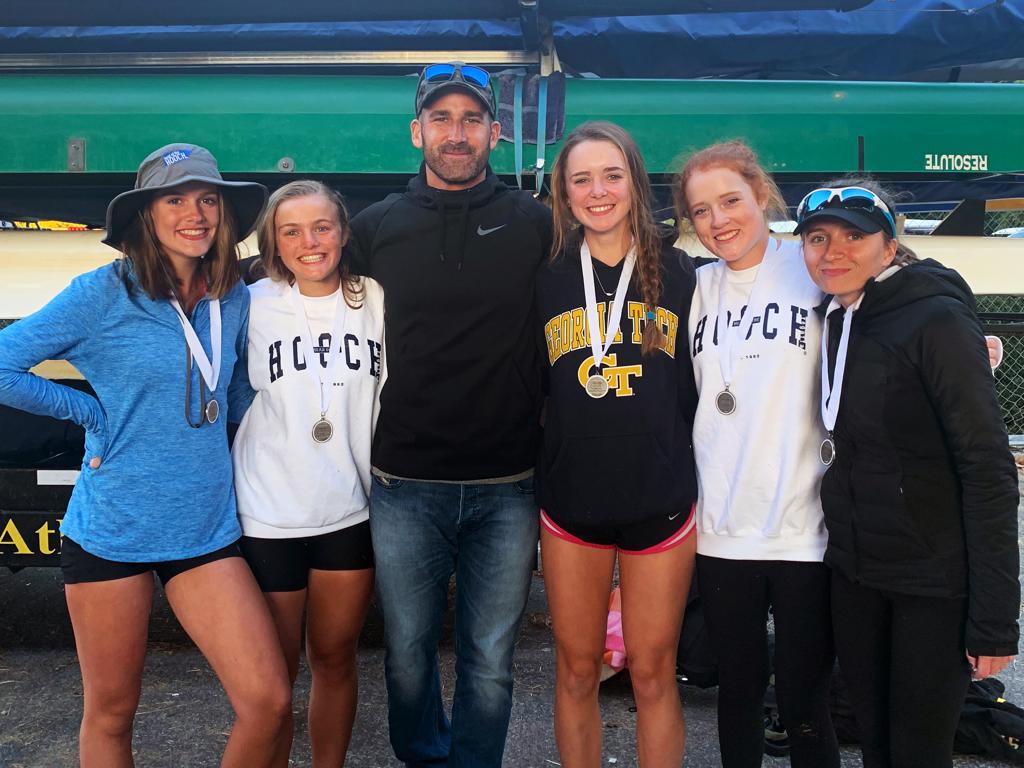 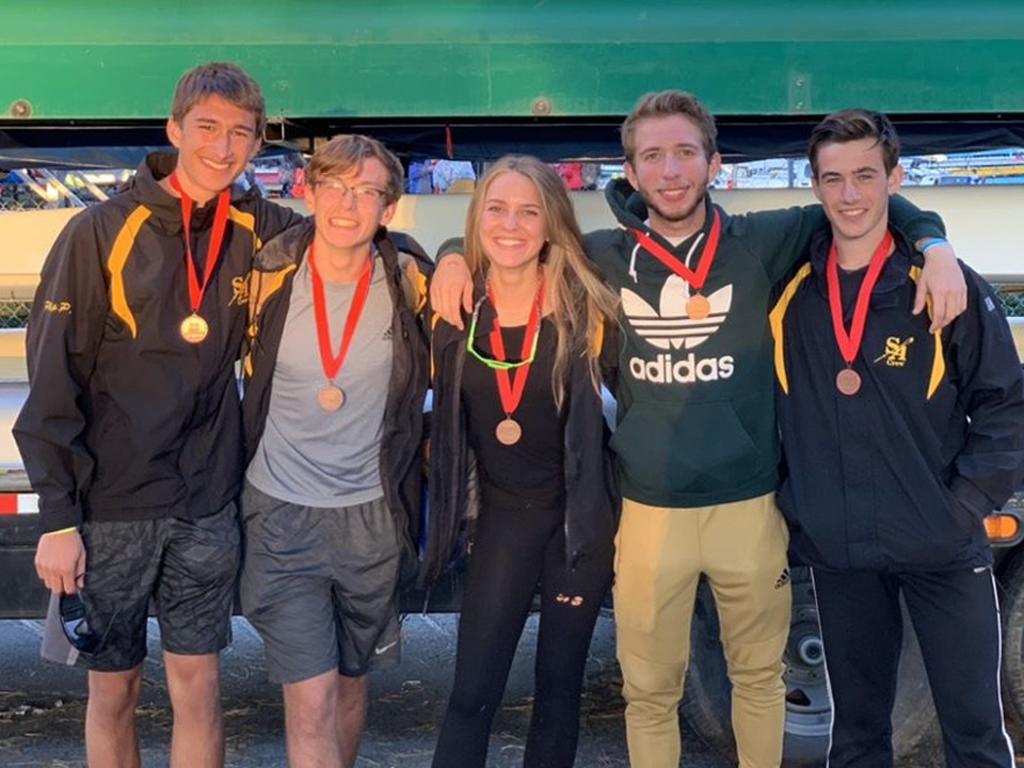 St. Andrew Rowing Club is a separate 501c(3) non-profit organization (EIN 58-2149631) not affiliated with the Catholic Church. In 1988, St. Andrew Catholic Church allowed Georgia Tech Rowing to lease a small piece of their beautiful campus along the Chattahoochee River. As a stipulation for doing so,  a few generous Parishioner helped fund and establish the first Junior Rowing program on the Chattahoochee. 40 years later, we still enjoy a wonderful partnership with both the Georgia Tech Rowing Club and St. Andrew Catholic Church. We are committed to being an excellent steward of the property and area surrounding the river. We continue to fund the club through registration fees and the generosity of our amazing SA Families.